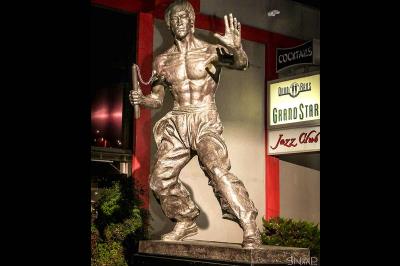 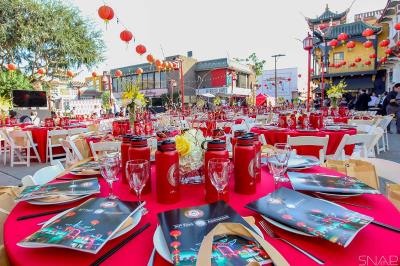 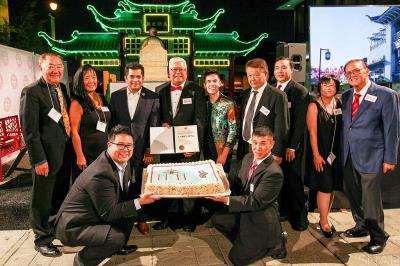 Incorporated in 1938, the Los Angeles Chinatown Corporation (LACC) was formed with the objectives of fundraising, site acquisition, design, and construction for Los Angeles’ Chinatown. LACC is the original developer and current landlord of the Central Plaza, the hub of Chinatown as we know it today, and other notable landmarks, including Seven Caverns Wishing Well and the four historical Chinese gates.

The original Los Angeles Chinatown, located at what is now Union Station, was settled by Chinese laborers in the 1850s; it developed into a thriving community in the late 1800s. In 1931, the construction of Union Station began. The Chinese community in the Los Angeles area was forced to relocate from their original site. Years of eﬀort and planning on the part of the community members formed to the Los Angeles Chinatown Corporation to lead the development of “New Chinatown,” so called because the original Chinatown of the 1800s had been demolished. In 1938, Central Plaza, the heart of New Chinatown, was dedicated with a grand opening ceremony. Today, this Chinatown remains the only privately-owned and maintained public community space in the country, and many of the properties within it are still owned by the original Chinese families who helped establish New Chinatown.

New Chinatown was the frst Chinese American community in the United States developed by Chinese Americans. Today, the direct descendants of those pioneering families continue to manage LACC and serve the city’s Chinese American community; with a history that spans 100 years, it is also the longest-standing Chinese community association in Los Angeles. LACC works alongside other community groups to sponsor many free community enrichment events throughout the year, which are hosted at the Central Plaza: the popular Chinatown Summer Nights, the Mid-Autumn Moon Festival, the Los Angeles Chinatown Firecracker Run, the Chinese New Year Festival, and more.

In addition to sponsoring events for the public, LACC has served low-income residents and senior citizens for decades. In the 1950s, the group constructed an apartment building to provide affordable housing to seniors, which it still operates today.

The Central Plaza is the home to the Bruce Lee Statue, the frst of its kind in the United States. During the last 50 years the Central Plaza has become the iconic Chinatown to the world as seen in the movies, television, social media and print.