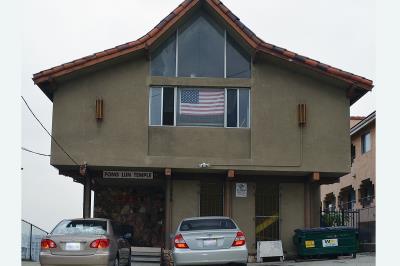 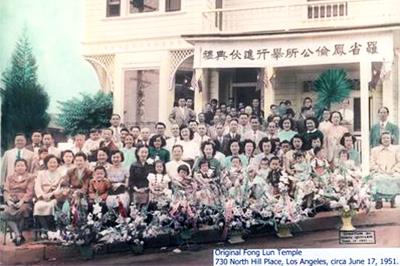 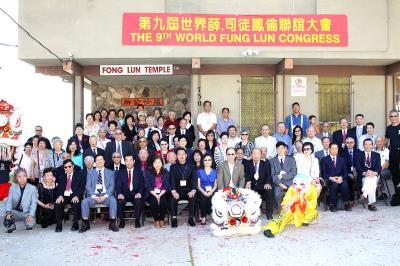 In the late 1930’s, Los Angeles and Oxnard was home to several hundred immigrants with the surname Sit and Soo Hoo/Seto. Recognizing a need to have a centralized point of connection for their clansmen, an ad hoc committee of Sit and Soo Hoo/Seto men came together in 1938 to explore how they could create such a nexus. As they began meeting on Ord Street in Old Chinatown, at a location called Morning Sunshine, the Fong Lun Association was formed. The Association became a vital place where clansmen could fnd social and physical support, maintain their cultural practices, and share news with one another about their families and the homeland. During World War II, many young men from the Sit and Soo Hoo/Seto clans served in the U.S. Armed Forces, fighting in Europe as well as in the Pacific and China. Following the war, with the repeal of the Chinese Exclusion Act in 1943 and the enactment of the Chinese War Brides Act in 1946, Chinese American G.I.s were able to return to China to marry and bring back wives to the The United States. For the Sit and Soo Hoo/Seto clans, dozens of young war brides arrived between 1946 and 1949 to start new lives and families with their husbands.

As a natural result, membership in the Fong Lun Association grew at such a rapid rate that it's building no longer accommodated all of its functions. In the anticipation of greater growth, in 1952, the leaders of Fong Lun registered with the State of California as a mutual benefit Association. It also applied for membership to the Chinese Consolidated Benevolent Association as a Charter Member. With its new status, the leaders were able to fundraise for the purchase of a new building which was eventually acquired at 730 N. Hill Place where the Fong Lun Temple Association continues to operate today.
The expansion of the Association was not always smooth. In 1964, the City of Los Angeles condemned the building as uninhabitable; it would have to be demolished and rebuilt. This created a financial crisis as the Association did not have sufficient funds to rebuild immediately. As an interim step, the leadership rented a small unit on Sunset Blvd. as a temporary office and created a plan to fundraise for the building. Fong Lun members traveled across the U.S. and Canada where large populations of Sit and Soo Hoo/Seto families resided to request their help. They successfully raised enough funds from these communities for a down payment and borrowed the remaining balance from Cathy Bank in Chinatown to begin construction. The new building was completed in 1966. Nineteen years later, in 1985, the bank loan was paid oﬀ. Additionally, many of the loans owed to Fong Lun’s members were forgiven by these members as their donation to the Association.

Since the Association’s inception, many obstacles were overcome through hard work and the leadership of Fun Lun’s officers and the generous support of clan members. With the passage of time, founding members have passed on and new leadership and new ideas have emerged to meet the changing interests and needs of its community. A Scholarship Fund was created in 1967 to recognize outstanding students in the Association and to motivate Sit and Soo Hoo/Seto children to continue to achieve in school. In the 1980s, the Women’s Auxiliary and Youth Council were established. The Scholarship Fund, in particular, represents Fong Lun’s investment in promoting the Confucian value of education and continues the Association’s legacy of benevolence. In the late 80’s, during an anniversary celebration of the San Francisco Fong Lun chapter, members planted the seed for establishing the World Fong Lun Association, which led to the 2 nd World Fong Lun Association Convention held in Los Angeles in 1993, and it’s incorporation in 1994 headquartered in Los Angeles.

In 2015, the 9th World Fong Lun Congress was held in Los Angeles. In anticipation of welcoming guests from around the world, the leadership raised donations and procured the labor to give the Association building a much-needed facelift. With the hard work and planning of committee members, the world conference was a success as many members of the Sit and Soo Hoo/Seto clans from around the world shared their ideas and thoughts as to how to lay the foundation for the next generations to follow.
In 2017, fourteen of Fong Lun’s members traveled to Singapore for the 10th World Fong Lun Congress. This was followed with a visit to the respective ancestral villages in Hoi Ping to see the the unique culture of Chek Hom, the mix of European and Chinese style architecture, and to witness the stories of our ancestors and their bravery and devotion to the welfare of the Sit and Soo Hoo/Seto clans throughout history.

Looking ahead, it is hoped that programs for the Sit and Soo Hoo/Seto families, such as the Scholarship Awards, an Essay Contest, Bi-lingual meetings, Chinese tamale/Joong making workshops, the Annual Spring Banquet and Picnic, Achievement & Merit Awards, Oral History Lectures, Home Village/Travel tours to China, and the Fong Lun’s global connections will continue to help the Los Angeles Fong Lun Temple Benevolent Association thrive and draw in new generations of members.